The Legacy of African American Women

In 1941, the overwhelming majority of the nation's African American population--10 of 13 million--still lived in the South, primarily in rural areas. During the war, more than one million African Americans migrated to the North--twice the number during World War I--and more than two million found work in defense industries (29).
Membership in the National Association for the Advancement of Colored People (NAACP) rose dramatically during the war, and the Congress of Racial Equality (CORE) was founded in 1943 (30). African Americans joined the armed services as well as involving themselves as industrial workers during the war. They helped contribute to the war effort in numerous ways. Still, African Americans faced racist policies, segregation, poor pay and often the worst job positions. Unequal treatment was a standard of life for African Americans during during World War II. Although World War II eventually offered some improvement to the treatment of African Americans in the long run, the system of segregation "prevented them from reaping the same benefits as their white counterparts" (31).
"No one does anything -- you never get anything-- out of the goodness of people's hearts," said one black women who had worked in a wartime munitions factory (32).

African American women served in many military career and held every position, ranging from nurses to spies to postal clerks. Despite their effort and contribution towards the war, the Army policy did reflect segregationist policies during World War II. Basic training was segregated, as well as living and dining (33). 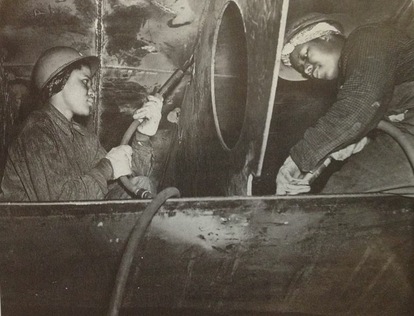 Scalers work on the S.S George Washington Carver at the Kaiser Shipyards.
African American women, though highly skilled, were often assigned to the dirtiest industrial tasks and received the lowest pay (34). 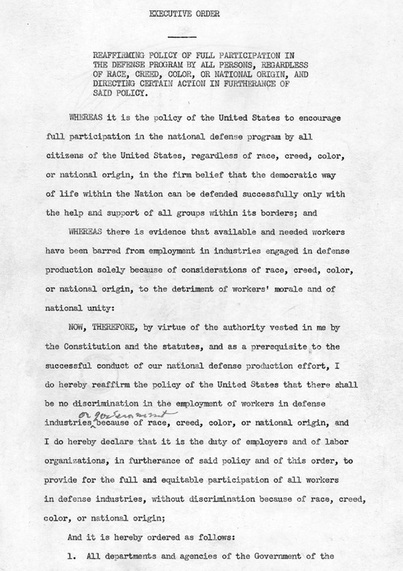 African Americans learned that they would have to fight for their own rights. As early as 1940, at a civil rights convention in Chicago, an African American women called for integration of the defense industries, where blacks were segregated into the worst jobs. Soon there after, President Roosevelt issued Executive Order 8802, which 'outlawed discriminatory hiring practices by defense contractors and established the Committee of Fair Employment Practices' (35). This was the first significant presidential action on behalf of African American civil rights since Reconstruction.
Although African Americans did fight for the passage of Executive Order 8802, Eleanor Roosevelt, President Roosevelt's very influential wife, was a strong supporter of rights for African Americans and did help with the passage of this act. Eleanor Roosevelt strongly opposed the Navy policy that kept African Americans enlisted in servile support jobs such as cooks and waiters (36).
New opportunities were finally given to African American women not only in the factories, but also in the flourishing black communities as well. The presence of blacks were apparent in the factories and in the blues clubs that began to proliferate. Many of these clubs were owned and ran by African American women who had migrated to California during World War II. One example is Margaret Starks, manager of Tappers Inn, the most popular club in North Richmond. Starks' flourishing business fed into her political activities, and she served as the secretary of the Richmond branch of the NAACP during the war years. Women like Margaret Starks, and places like Tappers Inn, provided an area where African- American people exerted some power over their lives and developed community institutions. Within these African American community, blacks could 'organize politically and form networks for their own social and economic needs'. This greatly contributed to the legacy of African American women from World War II (37). 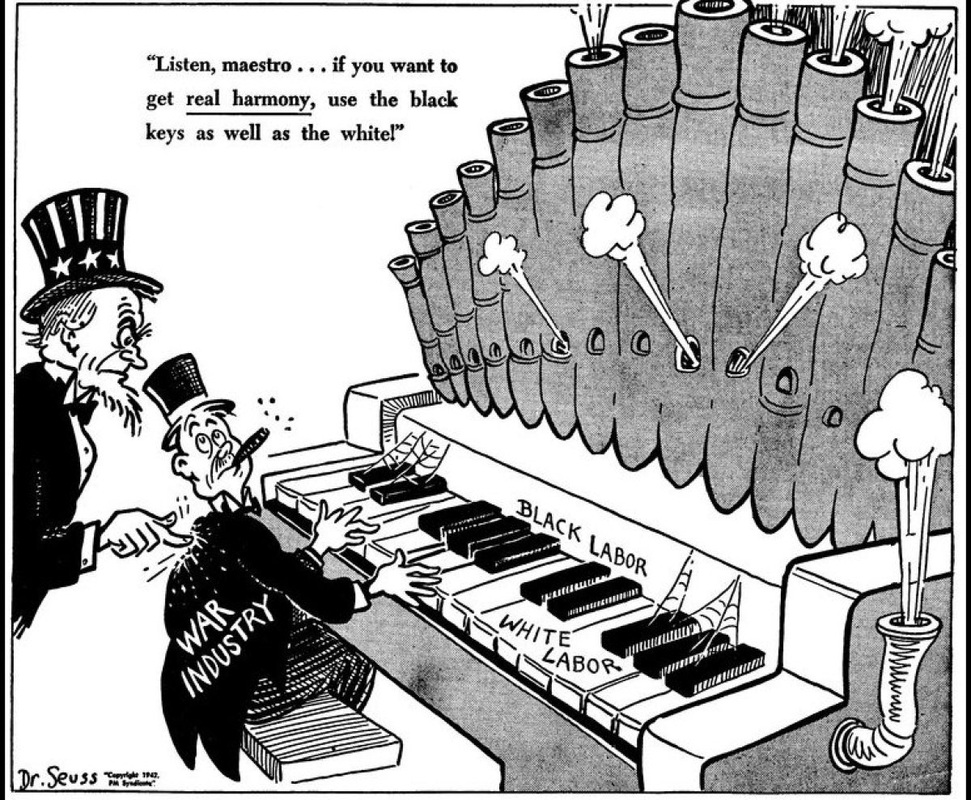 Dr. Seuss cartoon supporting the integration of workforces in order to increase production and efficiency of factories.

The Legacy of African American Women lives on....

"The first time I put on that uniform I felt very patriotic. I was doing something to serve my country. As a Black woman, I felt that this gives us a chance to show that we were proud of our country, ourselves, and the organization that we represented." (38)
- Pvt. Mary Ragland, WAC

"Hold your head up very high just like I do, and remember exactly who you are and where you come from." (40)
- Florence Franklin, sold war bonds