The Legacy of The Riveters

"You came out to California, put on your pants, and took your lunch pail to a man's job. This was the beginning of women's feeling that they could do something more." -Sybil Lewis, Lockheed riveter.

Women in the workforce were forced to give up their factory jobs to returning soldiers after the war.  Many women did not want to talk about their experiences in the war because it was too painful to reflect on how quickly their careers as riveters came to an end.  Women were also hesitant to share their stories because they felt that people were not interested to hear them, especially in the 1950s when working women were beginning to receive the blame for many problems in society, ranging from juvenile delinquency to divorce. 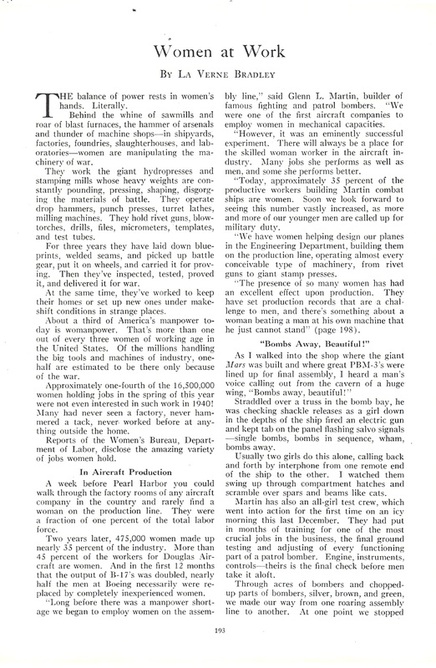 In this 1944 article in the National Geographic, La Verne Bradley explores women's contributions to the workplace during World War II. She suggests that they were skilled and essential, and should be recognized as such. She asserts women should feel empowered by their accomplishments in the workplace.

February 11, 1943  WASHINGTON, Wednesday—I did not have space to tell you yesterday that, last Sunday, in Portland, Me., when my train arrived a little after 9 p.m., Mrs. Eleanore Herrick met me and took me out to the shipyards to see the women working on the night shift. They have a great many women at work and it was really very dramatic to see the plant at night.

The women all seemed extremely interested... I understand that these women would like to work without a day off... The women know that this is a chance that may not last, to make money and to put it aside (17).
****
May 14, 1945 HYDE PARK, Sunday— I have been getting a good many letters of late about the Equal Rights amendment, which has been reported out favorably to the House by the House Judiciary Committee. Some of the women who write me seem to think that if this amendment is passed there will be no further possibility of discrimination against women. They feel that the time has come to declare that women shall be treated in all things on an equal basis with men. I hardly think it is necessary to declare this, since as a theory it is fairly well accepted today by both men and women. But in practice it is not accepted, and I doubt very much whether it ever will be.

Other women of my acquaintance are writing me in great anxiety, for they are afraid that the dangers of the amendment are not being properly considered. The majority of these women are employed in the industrial field. Their fear is that labor standards safeguarded in the past by legislation will be wrecked, and that the amendment will curtail and impair for all time the powers of both State and Federal government to enact any legislation that may be necessary and desirable to protect the health and safety of women in industry.

I do not know which group is right, but I feel that if we work to remove from our statute books those laws which discriminate against women today, we might accomplish more and do it in a shorter time than will be possible through the passage of this amendment (18).

When the war ended in 1945, so did the extraordinary job opportunities for women. William Mulcahy, who supervised women war workers who assembled sensitive electronic parts said, "Unfortunately, when the war ended, despite the skill and patriotism the women had displayed, we were forced to lay them off. I will never forget the day after the war ended.  We met the girls at the door, and they were lined up all the way down to Market Street to the old movie theater about eight blocks away, and we handed them a slip to go over to personnel and get their severance pay.  We didn't even allow them in the building, all these women with whom I had become so close, who had worked seven days a week for years and had been commended so many times the by navy for the work they were doing" (19).


This quote shows how women were rejected after the war ended despite all they had contributed to the war effort.  During the war, stereotypes about men's work and women's work were suspended and traditional barriers that had blocked women workers were lowered.  Women were finally given the opportunity to prove what they could do. 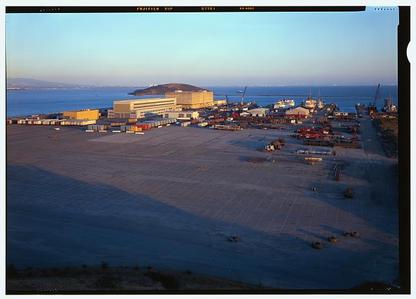 This picture of the Rosie the Riveter National Historic Park displays the lasting legacy of riveters during World War II. The gains in economic freedom may have been temporary, but the gains in self confidence were permanent. This picture shows national recognition of this important contribution of riveters to our society.
The "Rosie the Riveter" National Historic Park in Richmond, California was created in 2000 to honor Richmond's wartime industries and workers (20).