One of the most dramatic domestic changes during World War II was the increase in job opportunities for women. As the armed forces suited up with manpower, industries filled jobs with womenpower.  Women who worked in the air-force industry, known colloquially as "Rosie the Riveters", are the most widely recognized and remembered women to contribute to the war effort.
Employers and recruiters insisted that women's new jobs merely extended their domestic skills. Boeing Aircraft boasted of "pretty girls in smart slack outfits showing how easy it is to work on a wiring board." (1) 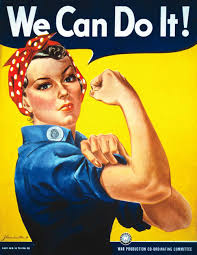 This poster issued by the government's War Production Board saluted the contributions of women who kept the country's factories going during the war. 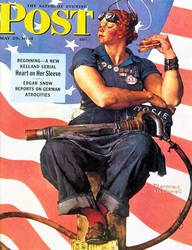 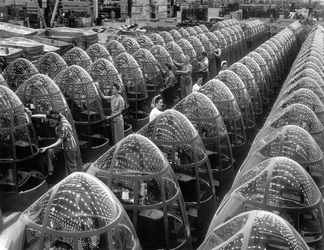 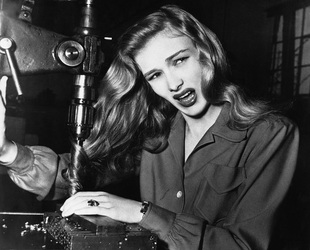 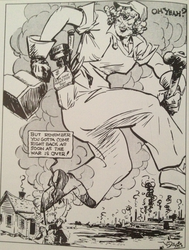 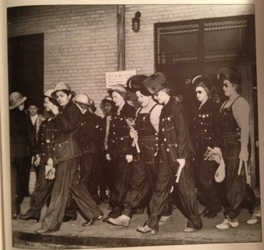 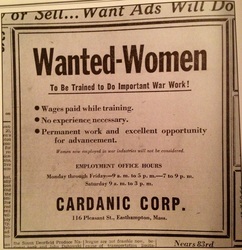 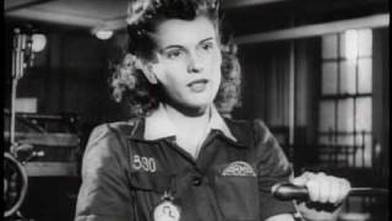 The propaganda film Glamour Girl of 1943 compared industrial work to domestic crafts: "Instead of cutting the lines of a dress, this women cuts the pattern of aircraft parts. Instead of baking a cake, this women is cooking gears to reduce the tension in the gears after use..." As seen in this propaganda film, women faced constant reminders that they were different from the male workers they replaced. (2)
Riveters broke countless gender barriers upon entering the workplace, but, as demonstrated by this song, were still depicted as "little girls". Although the line "that little girl will do more than a male will do" is supposed to be viewed as a compliment, women are labeled as "little girls". Women proved they were as capable as men, but they did not yet achieve complete respect or recognition of their skills and abilities (3).
The song "Rosie the Riveter" by Redd Evans and John Jacob Loeb, released in early 1943.

"All the day long,
Whether rain or shine,
She's a part of the assembly line.
She's making history,
Working for victory,
Rosie the Riveter.
Keeps a sharp lookout for sabotage,
Sitting up there on the fuselage.
That little girl will do more than a male will do."

"There's something true about,
Red, white, and blue about,"

This upbeat song was played on radios, records, and in coin-operated machines located in restaurants and bus stations that played three minute versions of songs called "soundies." (4)
These newspaper clippings express how impressed society was to see that women were just as capable as men. These articles speak about how women stepped into the roles of men when they were needed and have not let their bosses down. 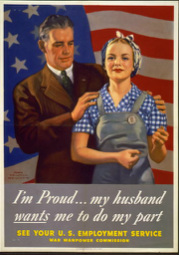 1944 War Manpower Commission Poster
Additionally, women joined the workforce to please the men of America, not to find freedom. Men knew that, with the help of women, the United States could win the war, so women were strongly encouraged to participate (5). As shown in this War Manpower Commission Poster, factory work was depicted as an honorable extension feminine ideals like patriotism and family. Additionally, their increased freedom was intended to be a temporary wartime measure. As soon as the United States achieved victory, the women could return to their domestic spheres, where their "husband[s]" typically "[want them] to do [their] part."