The Legacy of The WASPs, WAVES and WAAC

"My mother warned me when I took the job that I would never be the same. She said, 'You will never want to go back to being a housewife.' At that time I didn't think it would change a thing. But she was right, it definitely did. . . . at Boeing I found a freedom and an independence that I had never known. After the war I could never go back to playing bridge again, being a club woman . . . when I knew there were things you could use your mind for. The war changed my life completely. I guess you could say, at thirty-one, I finally grew up." (21)
-Inez Sauer, Boeing tool clerk

After joining the work force, women began to realize they were capable of performing similar, if not the same jobs as men. This new mentality diffused throughout society, encouraged others to change the way they saw and judged a women's potential. Little did society know how women's crucial involvement throughout many government implemented groups and organizations, specifically the WASP's, would help to forever change women's roles in society, and their power in the workplace. Strides taken during World War II, both on the homefront and abroad, helped set the stage for huge developments and accomplishments by women throughout the following decades.
As the war progressed, women, but specifically the WAVES, faced numerous challenges regarding their character and resentment from military men and society. The WAVES were about to prove their capabilities and slowly change the attitudes of those around them (22). 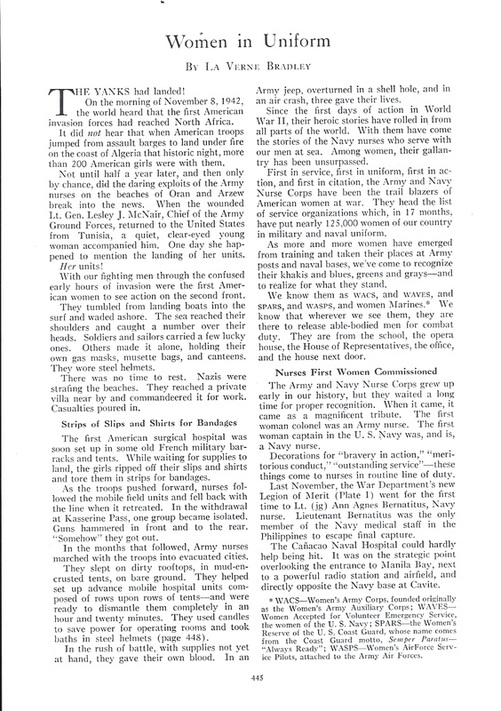 In this 1943 article in the National Geographic, La Verne Bradley assesses the brave and invaluable role of women overseas. Her writing asserts that women were as important and strong as the men and commends them for their effort.
WAVE Commander Mildred McAfee said even the officers who were opposed to WAVES in general felt “their” WAVES, women who they worked with directly, were fine. One 'famous' WAVE story is of a grumpy Navy captain who was assigned a female yeomen early in the war. He complained, but the woman wasn’t reassigned. At the end of the war, the naval officer was assigned a new, but male, yeoman. This time, he again complained, but now he wanted to know why he wasn’t being assigned a WAVE (23). 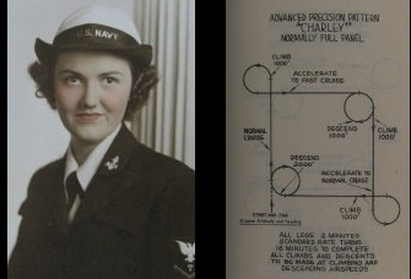 Jean Clark and the 'square search'
"We had to teach them what they call the square search. Where they were to fly in a direction for one minute and make a turn and fly, a left turn and fly in another direction until they could finally spot the field.  If they were lost in the fog and didn’t know where they were and were coming down and didn’t see it. That was mainly extra protection to keep them from flying into a mountain.

"The Navy has learned to appreciate the women… for their discipline, their skill and their contribution to high morale…Our greatest tribute to these women is the request for more WAVES."
- Navy Fleet Admiral Ernest King
(25)