"This is not a time when women should be patient.  We are in a war and we need to fight it with all our ability and ever weapon possible. Women pilots, in this particular case, are a weapon waiting to be used."
Eleanor Roosevelt, 1942

The Women Airforce Service Pilots, or WASPs, were integral to the war effort. When men left to fight, plane manufacturers still needed people to test the planes. The WASPs were the first American women trained to fly for the United States.(6)

The Women Accepted for Volunteer Emergency Service, or WAVES,entered the war as members of the U.S Navy.  Mildred McAfee, the first female commissioned officer in U.S Navy history, was the first director of WAVES. Previously, it was only during World War I that the Navy accepted females into its ranks, and mainly for clerical roles and as nurses, not as officers. After a twenty-three year break, women returned to general Navy service in August 1942.(7)

The Women's Army Auxiliary Corps, or WAAC, were the first women, other than nurses, to serve within the ranks of the U.S Army. WAAC was established to work with the Army, "for the purpose of making available to the national defense the knowledge, skill, and special training of the women of the nation." The Army provided up to 150,000 "auxiliaries" with food, uniforms, living quarters, pay, and medical care.(8)

Thousands of women joined the military, including Teresa D. James, a pilot for the WASPs.  On September 22, 1944, Teresa James flew the ten-thousandth P-47 Thunderbolt fighter plane that was produced at the Republic Aviation factory in Farmingdale, New York, to the Newark Army Base in Newark, New Jersey.  Named Ten Grand, the ten-thousandth plane had been made by Racers, as the workers at Republic were called (9).  The year before she flew Ten Grand, James had written a poem:

"We knew from the first that we were resented,
By the continued aloofness which the men presented...
It's tough, we know, but we are game,
We'll fight no end to make a name.
Remarks and opinions just egg us on
To win a place where we rightfully belong." 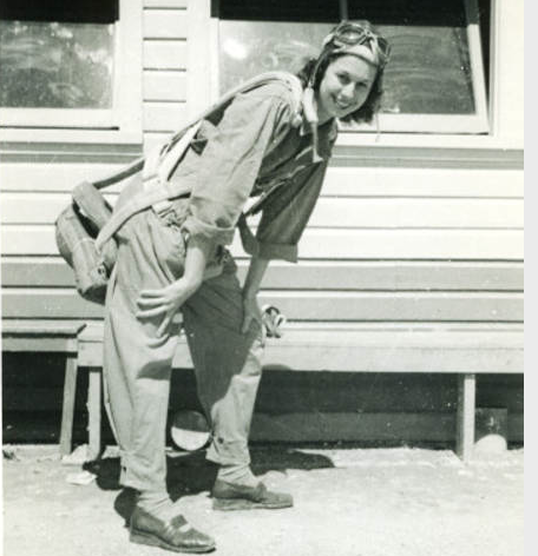 A WASP poses in full flight gear with parachute 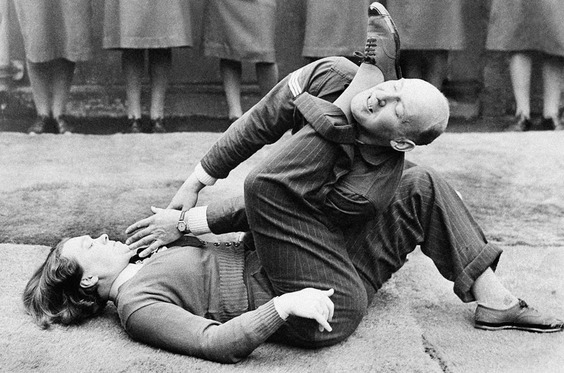 The picture shows a women being trained to protect herself if necessary. This picture shows that the women involved in the WASPs, WAVES and WAAC were taken seriously if they were willing to take their role in the army seriously as well.

Healthy, unmarried women with no dependents under the age of 18 could enlist in the WAVES. A WAVE who married might remain in the service, if she had finished basic training and as long as her husband was not in the service. The birth of a child brought an "honorable discharge" (10).

WWII WAVES reminiscing on their uniforms

Women of "excellent character" who could pass an intelligence test could join the WACs, provided they had no children under the age of 14 (11).

"Women are carrying on the glorious tradition of American womanhood. They are making history!... This is a war which recognizes no distinctions between men and women."
- Oveta Culp Hobby, director of WAC

Propaganda was created specifically to target those women who had never before held a job or had even considered joining the work force. Posters and films glamorized the roles of working women, portraying such jobs as extraordinary and women as attractive an confident. These posters reassured women that they could easily maintain their femininity while fulfilling their duties and helping their country. Posters came in all different sizes, ranging from small table-top displays to roadside billboards (12). They were produced under the supervision of the Office of War Information, which coordinated with various organizations to get the message out quickly and effectively. Groups such as the WASPs, WAVES and WAAC used propaganda posters to promote the message of women joining the workforce.
The armed services presented female recruits as very "feminine" and promoted the idea that military work would not make women "masculine" or ruin their moral character. A guidebook for women in the armed services and war industries included a photograph of a young WAVE with the caption describing her as "pretty as her picture... in the trim uniform that enlisted U.S Navy Waves will wear in winter... smartly-styled, comfortable uniforms... with a soft rolled-brim hat" (13).

Below are a selection of propaganda posters that were used to help recruit women into the workforce.